Teds, not just between breakfast & lunch

A place where you can order Waffle Fries in the morning next to your French Toast or Poached Eggs in the afternoon, it simply didn’t exist in Amsterdam. Until May 2015 when Teds opened it’s doors for brunch, not just in the weekend and between breakfast & lunch, but All day and every day. Because, why not?

In that time, day time restaurants offered their breakfast menu until 11.00, lunch from 11.30-15.00 and then you could only order fried snacks until the evening menu started. I’m the kind of person who can really have cravings for fries in the morning with a glass of Champagne or a bowl of Yoghurt and Granola in the afternoon. So I opened up Teds, thinking that I couldn’t be the only one missing a place like this. In the menu you find a big selection of my all time, wake me up at night, favorite dishes and drinks. Soul food, not exactly low fat, but food that will make you wobble on your chair wanting to wave your hands in the air and shout out YEAH. Amazing classics with a Teds twist or our own drooldrippin’ creations combined with a brunch cocktail, what else does a person need? Luckily there are a lot of people like me which made it possible to open up Teds Utrecht winter 2016, Teds The Hague summer 2018 and Teds Haarlem summer 2019.

But, who is Ted (you might wonder)?
Ted is my first ”born”, the sweetest, funniest and most loving French Bulldog ever. Named after my childhood idol, Ted van der Parre – Strongest Man in the World 1992. Opening the restaurant, the initial idea was that Ted would accompany me there every day, but adventures as he was, he went out wander lusting through the neighborhood which didn’t come in handy. His picture and little referrers to him you can find in every venue. 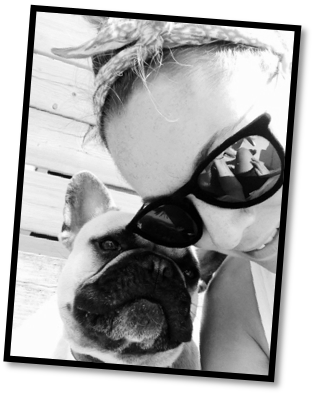